The History of Gubbio

Gubbio was founded by the Umbrians under the name of Ikuvium. The Tavole Eugubine, the most famous archaeological find in central Italy, show that it was an important political and religious centre.

Under the Roman Empire, Gubbio experienced a very important period: the Romans called it Iguvium and left splendid evidence that can still be seen today in the archaeological remains of the villas decorated with mosaics (archaeological area of Guastuglia) and the Roman theatre. At the end of the Empire, Gubbio was destroyed and dominated first by the Byzantines and then by the Lombards. Around the year 1000, Gubbio, which in the meantime had come under the rule of the Church through Charlemagne’s donations, reorganised itself architecturally and politically into a free commune.

In 1200 Gubbio became a Guelph town and from here began one of the richest periods for its citizens, witnessed by the renovation of many parts of the town and the construction of impressive architectural works such as the famous Piazza Grande and the Palazzo dei Consoli. This happy era for Gubbio lasted until 1350, a time when it was interrupted by strong internal struggles between the most important families, thus allowing the rise and subjugation in 1384 by Antonio di Montefeltro, Count and Lord of Urbino. The rule of the Montefeltro family and the Duchy of Urbino brought peace.

In Gubbio, under the Duchy, prosperity returns, reaching its peak with Duke Federico di Montefeltro, born in Gubbio in 1422: he promoted the arts to the highest levels, as is testified by the Ducal Palace situated in front of the city Cathedral in the upper part of the city.

Gubbio, what to see

The geometric centre of the town and its beating heart. The peculiarity of the square is that it is a “hanging square” supported by immense arches underneath called “arconi”. The square is an exceptional vantage point over the city.

Built in the 14th century with a Gothic façade overlooking Piazza Grande, built here so that it could be equidistant from the various districts of the city.

Built during the period of rule of the Montefeltro family in Renaissance style, it is an elegant place just a few steps from Piazza Grande. Inside the palace as well as the beautiful courtyard there is a perfect reproduction of Federico da Montefeltro’s studio, which is located in another palace in Urbino.

Former residence of the commander of the city guard. This is another valuable palace in the city.

In the small square in front of the palace of the same name is the Bargello Fountain, nicknamed the Fountain of the Madmen. Tradition has it that anyone who goes around the fountain and gets wet will become an honorary madman of the city.

At the top of Mount Ingino, which overlooks the city, is the Basilica named after the patron saint.

In the lower part of the town is this Roman theatre. With a diameter of over 60 metres, it bears witness to the ancient and varied history of the city.

The museum collection contains the history and evidence of local culture from prehistoric times to the 20th century.
www.palazzodeiconsoli.it

This museum housed in the canons’ palace shows the history of the city and its artists.
www.museogubbio.it

Museum of Arts and Crafts:

Legend has it that this was the ancient home of the city’s patron saint. As well as workspaces and a conference room, the museum contains numerous fine majolica pieces and over thirty reproductions of paintings made between the 16th and 19th centuries. casa-di-santubaldo

By means of small suspended baskets, it is possible to reach Mount Ingino, which houses the town’s basilica, in just a few minutes and you can also enjoy a wonderful panorama. 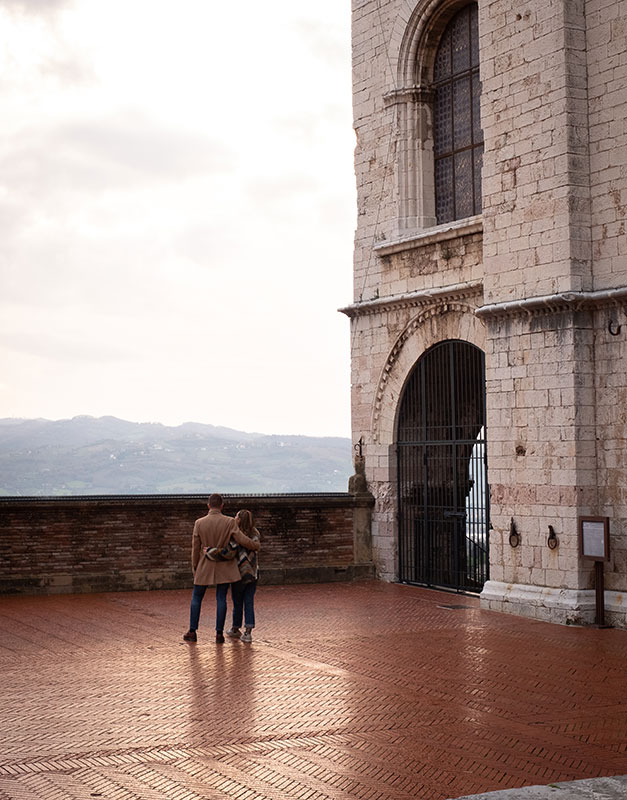 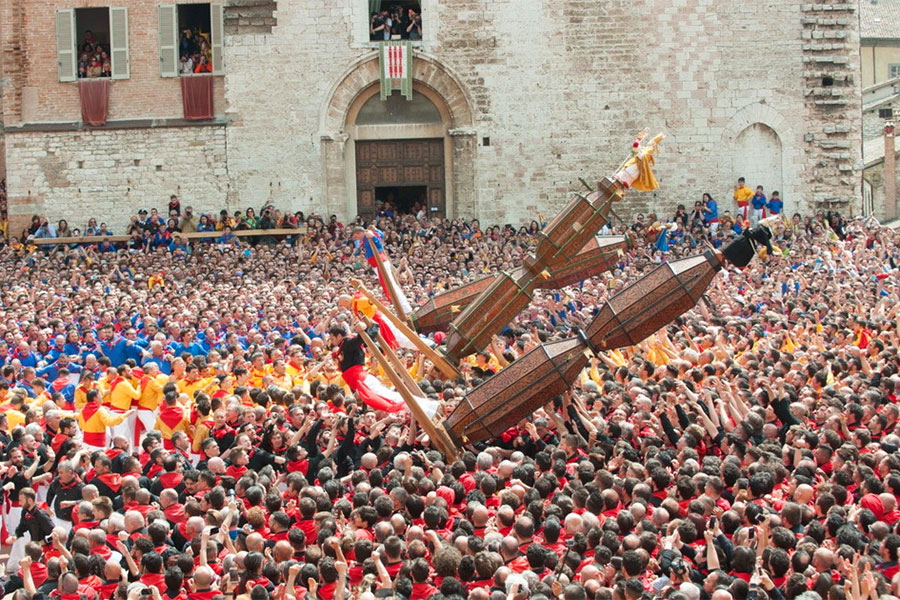 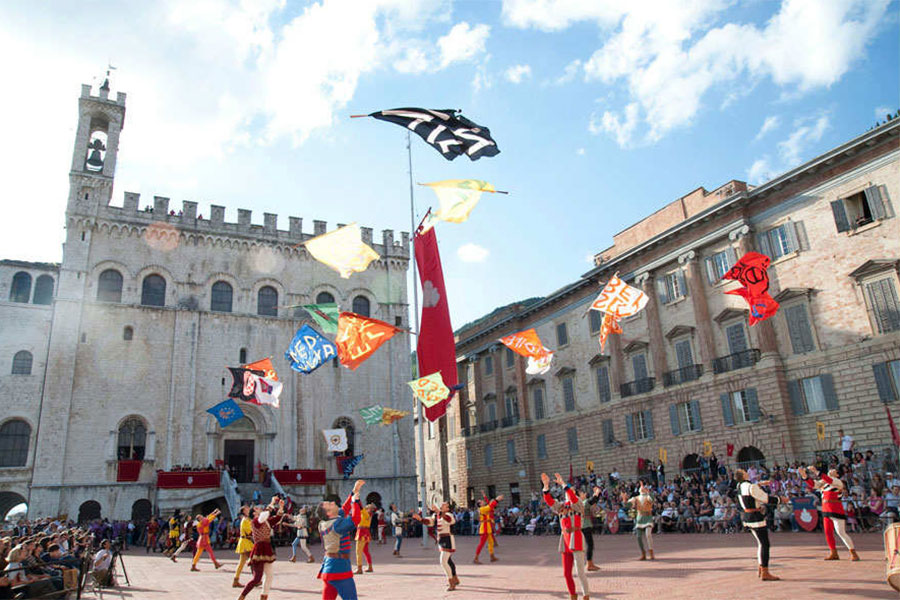 Held on 15 May in honour of the patron Saint Ubaldo, whose patronal feast day is the following day. Three large machines with the statues of Saints St Ubaldo, St George and St Anthony on top are carried on the shoulders through the streets of the historic centre to the basilica. The importance of the festival is evidenced by the presence of the three candles on the region’s coat of arms.

The palio has been held since the 15th century and is a team competition with antique Italian crossbows from a post. It is held on the last Sunday in May and is always in homage to the city’s patron saint. The crossbow groups from Gubbio and San Sepolcro compete in Piazza Grande, with characteristic period costumes and historical processions through the streets of the centre.
www.balestrieri.com

Tournament of the Quarters:

On 14 August, in Piazza Grande, the city’s four quarters – Sant’Andrea, San Giuliano, San Martino and San Pietro – compete in shooting with the ancient Italian crossbow from a post. The tournament is preceded by medieval historical processions that parade through the streets of the city.
tournament of the districts

This event of international stature and unique in the national panorama is focused on the dissemination of history. The events, which take place every year in September, host writers, journalists, architects and academics of national and international stature. The programme contains around one hundred events each year.
festivaldelmedioevo.it

With more than forty years of history, the white truffle and food fair hosts starred chefs, gastronomic events and stands with top-quality products. This exhibition is one of the most prestigious events of the Umbrian autumn.
tartufodigubbio.it

Gubbio during the Christmas months is a real gem full of events and attractions for all ages. From the largest Christmas tree in the world to the Christmas Land markets, Gubbio is to all intents and purposes the city of Christmas.
www.gubbioenatale.it

The entire slope of Monte Ingino is dotted with more than 500 lights forming the world’s largest Christmas tree, more than 700 metres high and 400 metres wide. It is lit on the evening of 7 December and is the guardian of the town’s Christmas for a month.
www.alberodigubbio.com 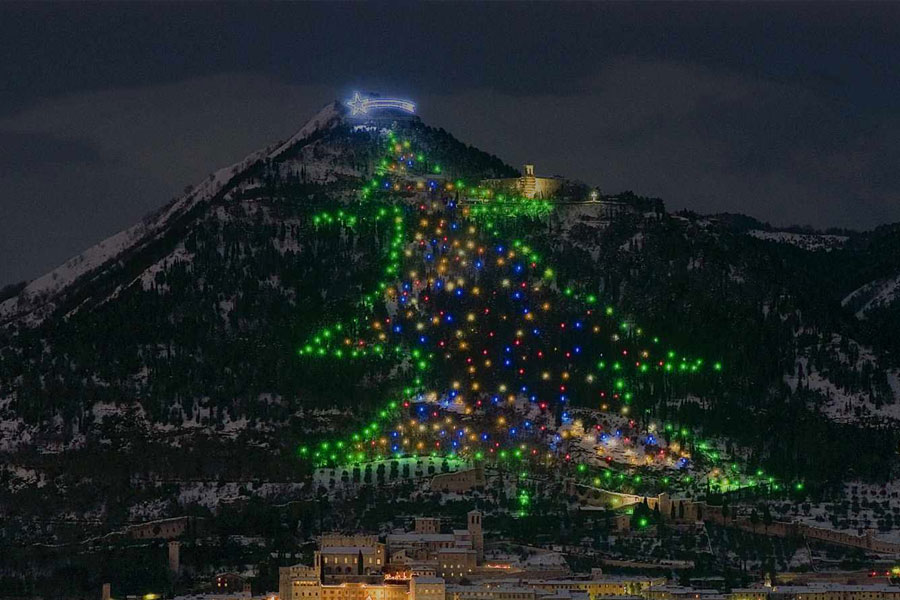 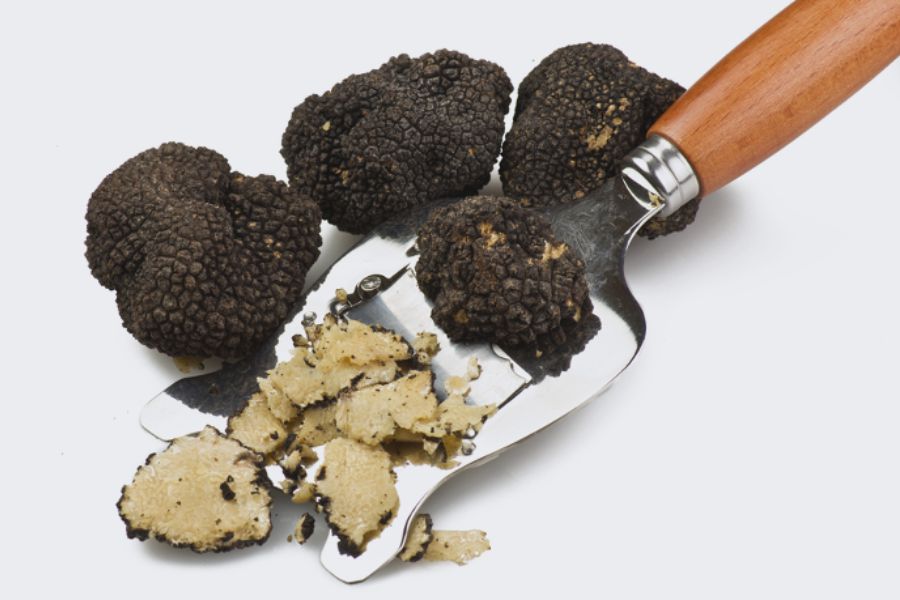 This event of international stature and unique in the national panorama is focused on the dissemination of history. The events, which take place every year in September, host writers, journalists, architects and academics of national and international stature. The programme contains around one hundred events each year.

A kind of very low bread baked in a pan. It must be accompanied by cold meats or cheeses. Preparation requires little time and the ingredients are few: water, salt and flour

Truffles from the area

The truffle is a tuber that grows underground next to the roots of shrubs or trees. The truffle is a valuable foodstuff and its cost can be very high, especially if it is a white truffle. Truffle hunters with their dogs find truffles in the woods at certain times of the year. In Gubbio, given the great tradition of the “truffle hunters”, every year there is a white truffle market exhibition, where it is possible to buy and eat this particular food in the most varied combinations.

We use cookies on our website to give you the most relevant experience by remembering your preferences and repeat visits. By clicking “Accept All”, you consent to the use of ALL the cookies. However, you may visit "Cookie Settings" to provide a controlled consent.
Cookie SettingsAccept All
Manage consent

This website uses cookies to improve your experience while you navigate through the website. Out of these, the cookies that are categorized as necessary are stored on your browser as they are essential for the working of basic functionalities of the website. We also use third-party cookies that help us analyze and understand how you use this website. These cookies will be stored in your browser only with your consent. You also have the option to opt-out of these cookies. But opting out of some of these cookies may affect your browsing experience.
SAVE & ACCEPT
Powered by

Open chat
Do you need information? Write to us ..
Taverna del Lupo
Hi, how can we help you?